The World Health Organization (WHO) defines social determinants of health (SDOH) as the conditions in which people are born, grow, work, live, and age, and the wider set of forces and systems shaping the conditions of daily life, including economic policies and systems, development agendas, social norms, social policies, and political systems. Conducting applied research to examine and solve for upstream factors beyond the four walls of clinical practice is essential for promoting the well-being of individuals, families, and communities, particularly those who are disproportionately affected by historical, social, and structural inequities. Examples of research initiatives in our portfolio include:​

Adverse childhood experiences (ACEs), which are defined by the Centers for Disease Control and Prevention as potentially traumatic events that occur in childhood (0-17 years), are a major public health problem in the United States.

ACEs disproportionately impact marginalized communities, including low-income populations and communities of color. Subsequently, examining and addressing ACEs is a key component of our equity-driven research agenda. 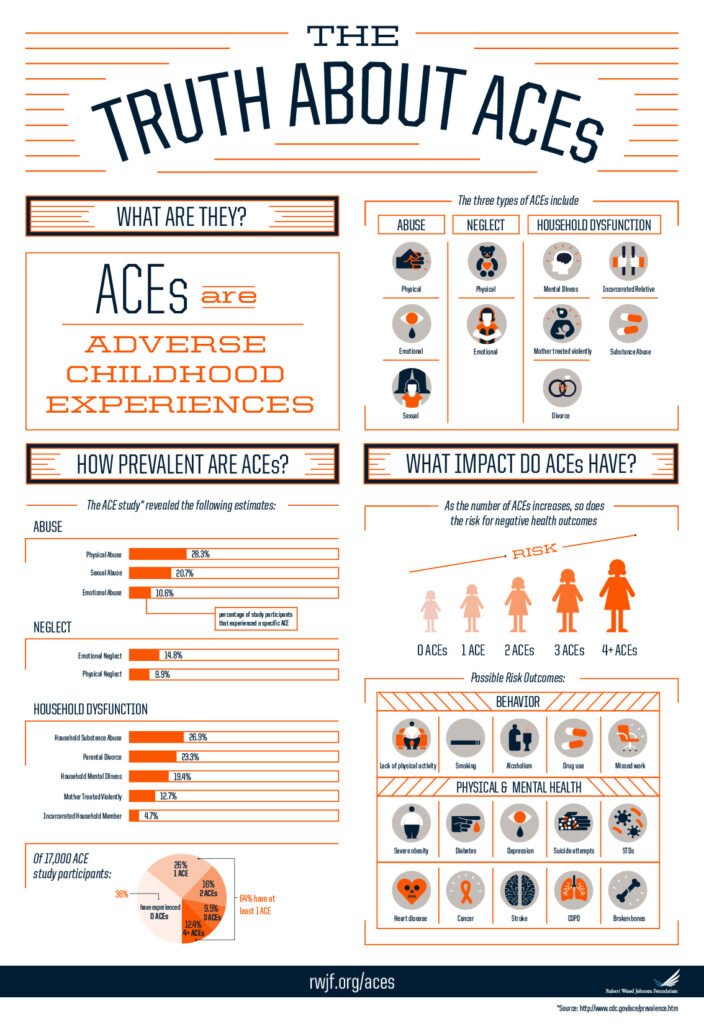 The Truth About ACEs Infographic by RWJF on RWJF.org

Although numerous studies have examined the relationship between adverse childhood experiences (ACEs) and suicide, research is needed that studies the effects of specific ACEs, including subclasses of ACEs, independent of the effect of other ACEs. We explored the relationship between ACEs and suicidal ideation (SI) with special attention to patterns according to generation cohort (millennials: 22–37 years old, generation X: 38–53 years old, and baby boomers: 54–72 years old), and assessed the extent to which mood and anxiety disorders account for the relationship between ACEs and suicidal ideation. Patients in behavioral healthcare services of a large federally qualified health center (n = 4,392) were assessed at baseline on ACEs, SI, and mood and anxiety disorders. Logistic regression modeling was used to examine the data. Emotional neglect was the strongest predictor of SI among Millennials (OR = 1.59), Generation X (OR = 1.81), and Baby Boomers (OR = 1.88) after controlling for mood and anxiety disorders, race/ethnicity, and gender. Findings suggest ACEs predict an increased likelihood of having SI over and above the influence of mood and anxiety disorders, in models adjusted for gender and race/ethnicity. Across generations, the association with suicidal ideation was strongest for any child abuse and neglect, but not for household dysfunction. The observed association of ACEs with suicidal ideation suggests that ACEs should be considered as a risk factor and incorporated into screening assessments for suicidal ideation. Lastly, additional research on the association of ACEs and suicidality in individuals not actively being managed in behavioral healthcare settings is also warranted.

The rise of adverse childhood experiences during the COVID-19 pandemic

Adverse childhood experiences, which is defined by different forms of abuse, neglect, and household dysfunction occurring before the age of 18 years, is a major public health problem in the United States that has the potential to worsen in the current COVID-19 pandemic. Moreover, the challenge is even greater for children and youth from low-income communities and communities of color. Thus, there is a greater need for investments in youth-serving systems within and beyond health care and public health to effectively address adverse childhood experiences and prevent its short- and long-term negative health and social sequelae well beyond the current public health crisis.

Adverse childhood experiences (ACEs) and substance use disorders (SUDs) are highly prevalent public health challenges that have been shown to be strongly correlated. Although previous research has suggested a dose-response relationship between ACEs and SUDs, less is known about this phenomenon and the prevalence of ACEs in lower income, racially/ethnically diverse populations. This study sought to examine these relationships in a population treated at a multi-site safety net provider.

The ACEs survey was delivered as a standard assessment to all behavioral health patients seen at a large Federally Qualified Health Center (FQHC) in Connecticut. 4378 patients completed the questionnaire. Both total score and individual ACE questions were correlated with diagnostic history, according to chi-square and multiple-group structural equation modeling tests.

84.8% of patients reported at least one ACE and 49.1% had an ACE score ≥ 4. Experiencing 1 or more ACEs predicted having any SUD, after controlling for race/ethnicity and gender. Parent substance use, physical abuse, and sexual abuse in particular were the strongest predictors of developing any SUD. Men and non-white individuals were more likely to develop an SUD with lower ACE scores than women and white individuals.

Housing instability is a major public health challenge facing 4.2 million youth across the U.S., and disproportionately affecting LGBT and youth of color. Nonetheless, early actions to intervene can help boost resilience and change the life trajectories of homeless youth. School based health centers (SBHCs) in particular, can serve a vital role in actively addressing the health and health-related social needs of youth experiencing housing instability, including serving as the gatekeeper to community-based supports.

Community Health Center, Inc. (CHCI)/Weitzman Institute, as one of the largest Federally Qualified Health Center (FQHC) sponsors of school based health centers in the country and the leading sponsor in the state of Connecticut, is facilitating a youth-driven policy and research project led by Dr. April Joy Damian, to better understand the factors contributing to housing instability among youth with a particular focus on New Britain, Connecticut given the significant health and social disparities in this community. ​

Please refer to the Policy section of our website for more details about our efforts in this area. ​

While gender-based violence (or GBV) is often a contested term, Weitzman Institute believes that all forms of gendered and sexualized violence are complex manifestations of power and control, and they should be researched as such. Types of GBV include but are not limited to: domestic violence (often called intimate partner violence), sexual violence (including rape), and human trafficking. Examples of research initiatives in our portfolio include:

Stay Up to Date